As Bitcoin recently hit a new all-time-high of nearly 3000$. This is ten times as much as in 2015. Many people get lured in by the promise to get rich quickly. Cryptocurrencies are a hot topic. I wanted to write down my view on this in mid-2017, because the technology will most certainly change global finance in the next years. 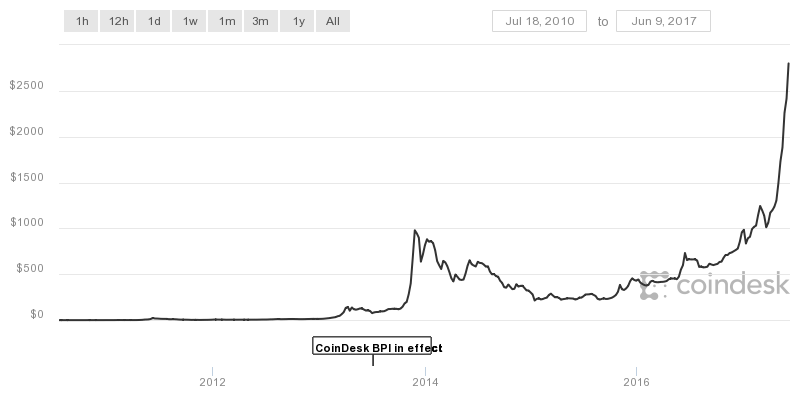 The very short description is: A globally-distributed database of transactions in a virtual currency.

For programmers and computer scientists, I can be concise and informative: The fundamental data structure is a merkle tree of "blocks". Like git repositories, history can be verified, the chain can be forked and easily distributed globally. Unlike git, it is a serial chain of blocks, thus the technology is named "blockchain". To add a new block, you have to solve a puzzle (find a string, which combined with the block contents computes a SHA1 with a certain number of leading zeros). As a reward for solving the puzzle and presenting your proof of work, you get some bitcoins and the global race for the next block begins. This puzzle solving is called "mining". There is also some more crypto magic involved, so only certain people can move certain bitcoins, just like only certain people can move the money in your bank account.

Bitcoin has a mystery creation story. It was created by "Satoshi Nakamoto", but we do not know who that is. Not even if it is a single person or a group. To honor the creator the "cents" of Bitcoins are called "Satoshis". Nakamoto basically dropped the software into the wild and amazingly it worked. As a software engineer, I find it remarkeable that there was no security vulnerability in Bitcoin. Nakamoto mined the initial blocks and with the current Bitcoin price he is a billionaire. However, he claims to have lost the keys to those Bitcoins and he has not been seen for years.

What are the differences to normal currencies?

Bitcoin appeals to anarchistic people, who like the fact that no government or central bank can control Bitcoin. Like the Internet, Bitcoin is seen as a global revolution for more freedom. On the other hand, governments can regulate, tax, or ban Bitcoin. The question is how this could be enforce, because the transactions on the blockchain are anonymous. On the other hand, if you identify which account belongs to which people, then the blockchain gives you a complete history of all transactions which can never be deleted or lost.

All this puzzle solving is a lot of work and since it is global race, that work is done very redundantly. Digiconomist estimated that in the day 2017-06-07 Bitcoin mining consumed 38424 MWh. That is enough to power over a million US households. Of course, this must be compared to the alternative costs of running the current banking systems, but it is unclear which parts of that system Bitcoin could replace. Depending on your views about this, Bitcoin is more or less efficient than current state of the art.

The Bitcoin network tries to produce one new block every ten minutes. The more miners there are the faster they find the puzzle solution. To regulate the speed the puzzle is made harder, if the last blocks were found too fast. If you want to move your bitcoins, you create a transaction and send it to the miners, who will hopefully include it in the next block. You can bribe them to prefer yours. It often happens that multiple miners solve the puzzle at roughly the same time. In this case the chain forks and it will take the network a while to find a consensus, which chain should be the official one. So, you should wait for a few blocks until you can consider your transaction official. Since one block takes ten minutes, a transaction can easily take an hour. An hour is long, if you compare it to paying with your credit card, but fast, if you compare it to a wire transfer.

Mining Bitcoins is like printing money. While you will only rarely win the race for the puzzle solution, there is a new race every ten minutes and if you do it long enough it pays off. The main cost is electricity. Today you need special hardware (high-end GPUs or ASIC chips) to be profitable and you should be where electricity is cheap. For example, close to a hydro-electric dam in China. This means Bitcoin is not really that decentralized as miners cluster, but so far it works out fine.

Soon alternatives to Bitcoin appeared. Initially, it was blatant clones. You can simply copy the software and start a new blockchain. These alternative coins (altcoins) are usually scams. Then people tried various improvements. Litecoin made mining with ASICs impossible by using a memory-intensive hash function to decentralize mining. Namecoin uses the blockchain to track the ownership of DNS entries.

For some, even this is not enough. Ethereum is the most general blockchain you can get. You can put turing-complete programs into the blockchain, which is now turned into a virtual machine. The programs have their own accounts, which means once released they act on their own and are called Decentralized Autonomous Organizations (DAOs). When the word turing-complete appears in combination with something, which should be simple, it is suspicuous. And yes, a year ago someone exploited a DAO vulnerability. In response, Ethereum forked and now there is Ethereum and Ethereum Classic.

Thanks to the genericity and power of Ethereum, you can build altcoins on top without having to replicate the whole infrastructure. This seems to be the current hype. What application can you build on Ethereum? Augur will be a prediction market. Golem wants to be the a global grid computer for everybody. Currently, Ethereum is the second biggest cryptocurrency after Bitcoin.

Ripple is the third biggest cryptocurrency according to market cap, but it is very different. Ripple claims higher transaction speeds. While there is a block chain, there is no mining. Instead of miners there are special validator servers which have to be trusted. Ripple the company has a lot of control, which makes the cyberpunks denounce it as a scam. On the other hand, the system is more familiar for government and corporate. The company knows this and focuses on banks. It does not really compete with Bitcoin, but rather with SWIFT.

If we are really aiming for a global currency, transaction speed is important. Bitcoin currently could achieve 10 transactions per second (tps), but in practice it is below 4 tps. Ethereum is slightly better at 20 tps. What transaction speeds do we need? Paypal has peaked to 400 tps. Visa claims 1667 tps and estimates that 56000 tps would be possible. These numbers make it clear that Bitcoin is not ready to be a currency to pay for your groceries. Crypto currencies have to seriously innovate to compete with Visa and serve as payment technology for ordinary people.

This does not mean that Bitcoin is useless right now. There are other use cases, like competing with wire transfers, an investment like gold, or as a cheaper inter-bank network.

Crypto currencies are here to stay and it seems inevitable that the technology will change the world. Bitcoin is currently the dominant crypto currency, but due to its limitations, I do not believe that it will stay that way for long. Will Ethereum be the next big thing? Maybe, but its transaction speed is not much higher. Ripple is faster, but is more centralized and does not inspire the anarchistic cyberpunks. More ideas are currently developed, like Iota, which claims to improve transaction speed and cost drastically.

Bitcoin exists through software. It could evolve and gain all the desirable features it currently lacks. This requires the community to change their software together, though. The current discussion around UASF BIP148 shows how hard that is. There is a deadline on August 1 and various ugly things could happen. Maybe Bitcoin evolves and establishes its dominance again. Maybe Bitcoin gets hurt and other crypto currencies take over. If you look at the market caps, Bitcoin has 45%, Ethereum 24%, Ripple 10%, and the rest is neglible. It would not take that much to dethrone Bitcoin. 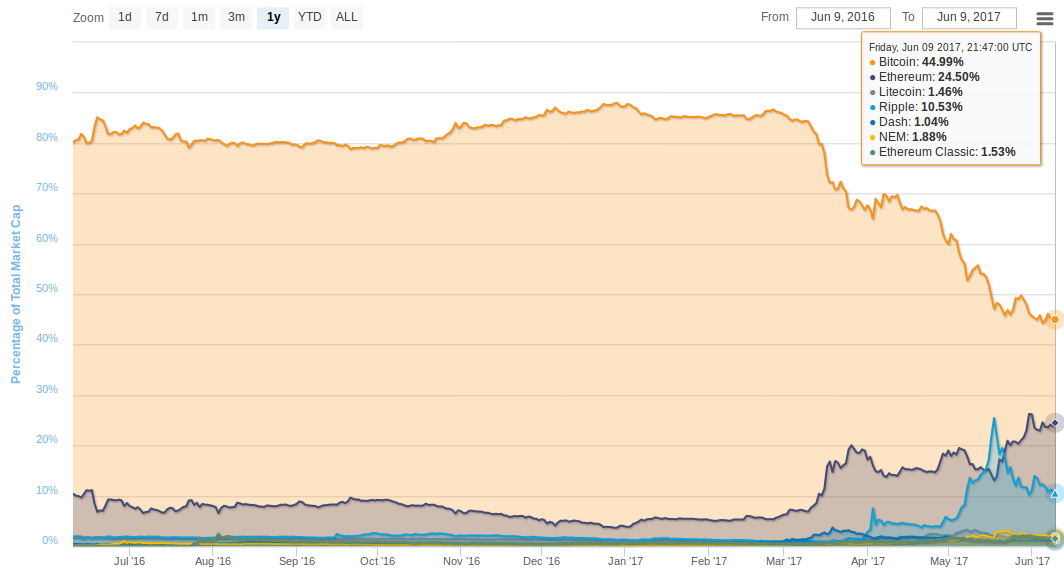 Bitcoin is a revolutionary technology. It might also be replaced quite soon.