He is kind of the grandfather of Agile and thus a relevant influence for modern software development methods: W. Edwards Deming

I have heard of Deming every once in a while. It is inevitable when you try to understand Agile and its Lean roots. Yet, whenever I read about him, I had the feeling I was misunderstanding him. His use of words felt slightly off. Maybe he uses different meanings and assumptions than I do? His prominence suggests that it would be worthwhile to dig deeper, so I bought his book "The New Economics".

Deming himself considers the heart of this book a transformation of companies in four aspects:

This is high-level advice to which nobody would disagree today. On the other hand its is still easy to find examples today where these things went wrong. They are simple but not easy.

At the start of the book Deming laments about the quality of US products. His definition of quality:

A product or a service possesses quality if it helps somebody and enjoys a good and sustainable market.

This is not how I would define it. I usually prefer a definition which suggests measurability, like "degree to which the product/service fulfills the requirements". You can even find a formula like SQ=P-E, which says service quality is the difference between expectations and performance.

Wikipedia describes Demings definition of quality as "results of work efforts divided by total costs" and summarizes his philosophy as:

My understanding is that Demings "quality" is "value added". A company transforms incoming supplies into output. Hopefully, the output has more value than the inputs and the effort to transform them, otherwise the company will be bankrupt soon. This fits the first definition directly from his book. In contrast, any good engineer will always have ideas how to improve the quality of a product, but if the customers do not value that then it does not improve quality in Demings sense of the word.

You cannot divide and delegate this quality to lower levels, since it is the aim of a system and you cannot optimize a system by optimizing parts individually.

Demings definition of a system:

A system is a network of interdependent components that work together to try to accompĺish the aim of the system.

Deming believes that a system require cooperation. If the components compete with each other it will destroy the system because it does not work at its full potential. He considers it necessary to manage a system otherwise (due to western culture) components will compete.

Deming shows a system of quality improvement in Fig. 6 which ignited Japans industrial revolution in 1950. 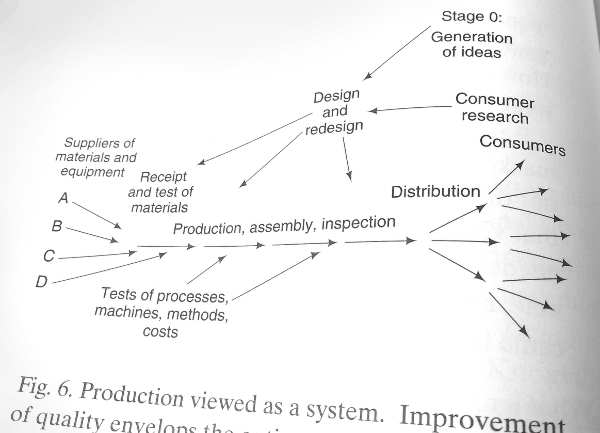 Fig. 7 is like Fig. 6 but the descriptions are put in boxes. The caption says "The system is destroyed". Just by drawing separating lines, you introduce competition which is harmful for the system over time. This is an observation with much evidence: If you separate humans into groups, an ugly "us vs them" mentality starts. Lesson: If you draw the system you are working in do not draw teams or departements. Instead draw the activities. Will try that at work.

Deming is a fan of monopolies because there is no competition and thus high efficiency. Good examples are: Bell Telephony Labs. Competitive companies have redundancies and thus form a less efficient system. However, it assumes that the monopoly still has the right aim though, but a monopolist often changes its aims. The incentives that make the customers happy get lost. I do not know how Deming would argue that.

The book is a introduction to Demings work and suitable for a broad audience. This means it does not contain technical details, e.g. on the statistical tools he used. As a computer scientist I'm used to much denser texts and the book does feel repetitive and too simplified sometimes. I did not learn anything directly applicable. The book did give me a better feeling about these process improvement topics and for that it was worth it. For example, it helps to understand where CMMI, ASPICE, and other standards come from. They are later iterations of the general ideas Deming pursued.

A book review which is about system thinking, statistics, learning, and psychology.