"Murderer!" Simba growled and approached Scar. Behind him lightning flashed and thunder roared. 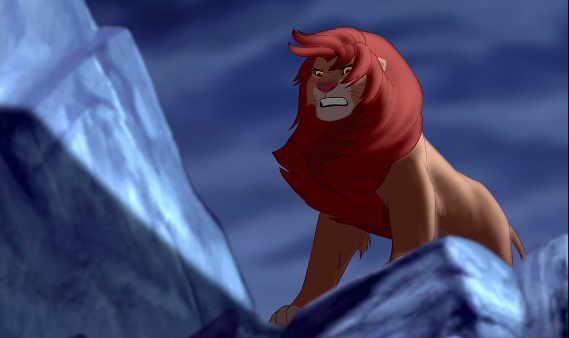 "I understand your anger," Scar said with a sad look, "but before we arrive at the last act of your revenge, there is something you need to comprehend."

Simba glared at his uncle. His mane was dripping wet from the rain. After a quick shake, the mane waved majestically again.

"Know what sacrifice a king must make for his people," Scar continued. His stance was relaxed. "Your father sacrifice himself; As did I; And you must prepare yourself."

"My father did not sacrifice himself, Scar." Simba hissed. "You killed him like a coward."

"I have to admit that my brother did not perish voluntarily, but he turned down Rafikis plan. Unfortunately, you had to pay the price for Mufasas proudness."

"Rafiki? What does he have to do with this?" Simba made another step towards Scar and watched him warily. "What lies do you tell me now?"

"Once you are king, the old ape will surely babble about it." Scar mumbled. "The important lesson for you now is that the circle of life is not necessarily fair. Rain can stay away and a drought can threaten all life in your kingdom. No matter how strong your muscles or how loud your roar, everybody can die."

"What draught, Scar? Your ruling has made this land barren. Your greed threatens all life here."

Scar smirked. "No Simba. I'm not that potent. Not even Rafiki can influence the weather although he likes to indicate it. Rafiki can see the signs though. He foresaw the river drying and the rain missing."

Simba squinted. "You tell me you killed my father because it did not rain?"

Scar looked Simba straight in the eyes. "Mufasa had to die before the river dried up so he was not to be held responsible for it. So you can be the savior. So our people continue to trust their king."

Scar went on. "Rafiki proposed that I overthrow and exile Mufasa but your father refused. This is why I had to kill my brother and exile you. Now the rain has returned, so I brought you back."

Simba shook his head. "You did not bring me back. Nala found me."

Scar smiled. "So who sent Nala all the way to the oasis? Without help you would not even have reached it. If you remember, you passed out in the desert. You were a mile away from the water hole. Rafikis agents brought you there."

Scar carried on. "Now is the time to succeed your father as the land blooms again."

Rain poured down on Pride Rock. After a while Scar said "For me is the time to abscond. My sacrifice is to take the blame so you can claim the glory and trust; So lions will continue to rule."

Simba sat down. "So you will not fight?"

Scar chuckled. "We will fight. You will throw me down Pride Rock for all the world to see and become the rightful king."

"Ludicrous. I would not survive for long out there. A fall down the rock is the best death I can wish for."

Simba looked down. "Why? Why do you do that, Scar?"

"So the circle of life can go on. The circle is no law of nature. It can come to an end. I decided when and where we hunt such that no species goes extinct and our pride survives." Scar closed his eyes. "They despise me for these decisions."

Simba watched the sky where lightning flashed. "You killed your brother so we remember him as a wise king? You exiled me so I get the glory of the recovery?"

Simba slumped down. "This is what it means to be a king? To lie to your people?"

Scar growled. "It means to accept the responsibility. You are not a cub anymore, Simba. You are strong and Mufasas heir." He rose. "One last thing before we fight: For posterity you should make me a proper villain. I could have allied with the hyenas for example and for irony they could devour me at the end."

Simba got up as well. "Who would ever believe that?"

The discussion on r/rational brings up some great further ideas.