Why is your multi-year epic project still not profitable? Because you don't understand how the "technology adoption life cycle" (the one with visionaries, early adopters, mainstream, laggards, etc) really works. The ultimate book on this topic is Crossing the Chasm. –Apenwarr

After hearing about the book multiple times, this quote finally convinced me to read it. Now I confirm that it does indeed deliver an insight not as widely known as it should. 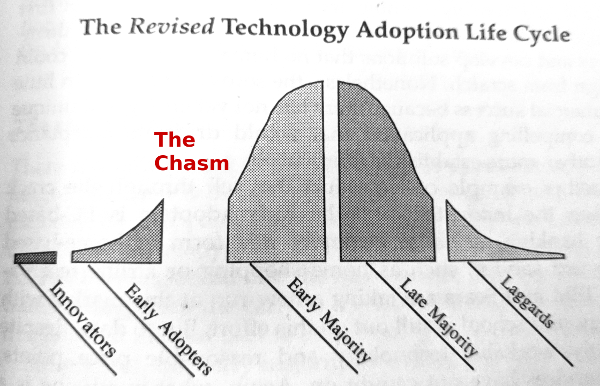 On the other side of the chasm are potential customers but they require a completely different approach. For your current customers, you sold them a dream and then you went on a journey together to realize it. Now you try to sell your dream and they don't understand you.

Early majority people are not looking for a dream. They are fine with a small improvement but they want evidence that it will work. References to existing customers would be evidence, so you present the early adopters and your journey with them. They are appalled because they don't like going on unpredictable journeys. A comparison with your competitors would be evidence but there is no competition because your product is so innovative. At some point they start asking about potential extensions and integrations. Maybe you finally woke them up and they started dreaming about the future a little? You join into the brainstorming what you could pilot together. Suddenly silence. On their way out, they repeat that did not intend to go on a journey with you.

Your methods stopped working. You see that the market for your product is huge but your sales stagnate. You stand in front of The Chasm.

How to cross The Chasm?

This is what 2/3 of the book is about. Success means to avoid any of the thousand mistakes you could make and Moore discusses a lot of aspects; Too many to list them in a blog post. The general strategy is like the D-Day invasion and described in the chapters 4 to 7:

Where i disagree with is Moores pitch for intuition.

You cannot expect to transform a low-data situation into a high-data situation quickly. And given that you must act quickly, you need to approach the decision from a different vantage point. You need to understand that informed intuition, rather than analytical reason, is the most trustworthy decision-making tool to use.

Picking the right niche to cross the chasm is essential. I agree that reason is not helpful because the product is novel so old models cannot be applied. However, intuition is also not helpful because useful intuition requires preconditions but they are not fulfilled here. The feedback cycle for such decisions is unreliable and slow.

Under what conditions are the intuitions of professionals worthy of trust? An environment of high validity is a necessary condition for the development of skilled intuitions. Other necessary conditions include adequate opportunities for learning the environment (prolonged practice and feedback that is both rapid and unequivocal). If an environment provides valid cues and good feedback, skill and expert intuition will eventually develop in individuals of sufficient talent. –Conditions for Intuitive Expertise - A Failure to Disagree by Daniel Kahneman and Gary Klein

We could try to use generic models but they will not improve our understanding much due to their genericity. As an armchair marketeer, I would aim for flexibility. One or two pivots should be possible.

We accept that we gamble here but at least the bet will not be fully lost.

The book is thirty years old so the Lindy effect says this will be useful for the rest of my career. The age of the book is obvious from the examples. Lotus 1-2-3 is repeatedly mention as the leading spreadsheet software instead of Excel.

Initial market research is showing clusters of users emerging who spend a large amount of time on the bulletin boards, just talking to one another over their computers. This form of communication supports a unique combination of anonymity and intimacy that may amount to something compelling. To my way of thinking, it is not a very good bet, but it is possible.

Today, these bulletin boards are called forums, aggregators, Reddit, Facebook, Twitter, TikTok. Later in the book, Moore considers which market the CD-ROM should tackle first. To my knowledge, video games were the killer application. He was close by pointing to the entertainment industry "music, music videos, and motion picture videos" but gaming was not on his radar at all. While the examples might be outdated, the core message of the book is still current.

The individual tactics might be outdated though. Marketing is a game where tactics change all the time.

At the very end, the book talks about compensation. It provides advice like compensating pre-chasm sales people with quick bonuses but the post-chasm people with equity to encourage stability. For developers, he points to a problem:

They [pre-chasm developers] can point with accuracy to the notion that they created a large part of the core product. Thus, should that product become a mainstream market hit, they feel they should get a major share of the gains. The fact is, they don't, and the truth is, bluntly, they don't deserve it either. Mainstream success, as we have argued at length, is a function of the whole product, not the core product, and that is a very large team effort indeed.

What the pioneer technologist does have a right to is a large share of the early market returns, because here it truly is the core product that drives success. The problem is that cash is typically tight during the period that there is none to throw off in the form of a reward. So equity is the usual fallback. [...]

The final word on pioneer technologists, I suppose, is that they are in the same bind as authors–a fate I can identify with. Like authors, they are compelled to conduct their craft regardless of whether anyone will pay for it. As such their negotiating position is fundamentally weak, and their normal compensation reflects it.

I agree with the tough words that developers do not deserve a major share of mainstream market success. Building a great thing is not even half the way there. Fortunately, software developers are mostly well payed today (at least outside the gaming industry) thanks to the enormous demand.

Who should read the book?

Enterprises should know about this to identify threats before they secured a beachhead. This is hard to see though because if you notice the attack you only observe a fraction of the capability due to its focus.

For a rough understanding of the Chasm concept, reading a few blog articles (like this one) should be enough. The full book is a must if you are professionally involved in marketing.