We had remarkable rates of execution, outstanding technology, an exceptional team and a strong development culture. This stuff was fine. The problem was the CEO i.e. me. I sucked at strategy or at best I was making it up and we weren’t learning. –On being lost

To overcome this weakness, Simon Wardley came up with a mapping technique. A "Wardley Map" is a diagram about business components. Components may be of different types: activities, practices, data or knowledge. Components are connected to show the flow of risk, information and money. It can be considered as "needs" dependencies. On the x-axis is the maturity from "genesis" over "product" to "commodity". The y-axis is not really an axis. There is just the convention that components "need" only components below. The map is anchored at the top to the customer/user for prominent focus. Directly below are their needs as they have the most value and further down derived needs.

Yes, there is no arbitrary y-axis, never was. Well, there might be but I never found it. The only reason it exists on a map is to help you get started. –Exploring Brexit 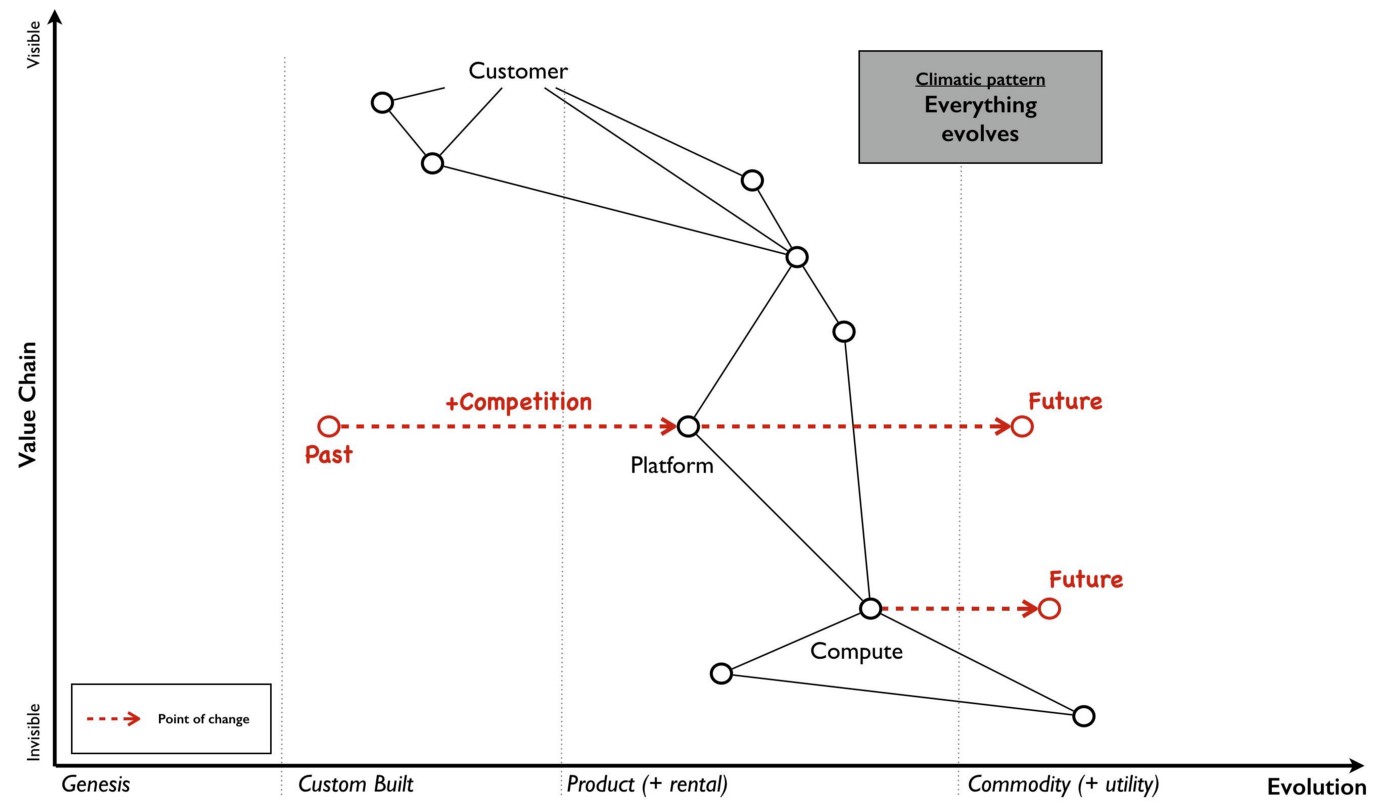 This visualization was invented by Simon Wardley and published as a series of 19 blog articles. It is not available as a book but the articles refer to themselves as a book and together they have book length.

The components and their connects remind me of the system diagrams of Deming in The New Economics.

Maps are for Strategy

The prime motivation for this mapping is to talk about strategy. As a general relies on land maps to order his troops around, Wardley uses his maps for situational awareness in strategic business decisions. Before using maps, he felt lost:

Am I copying ExxonMobile, Fannie Mae, Nokia and Blockbuster because of some deep strategic insight or because of past success? –On being lost

The components move to the right as they evolve. The speed is unknown although it can be influenced. You could use patents or FUD to slow down maturation. You could open up with Open Source, licences, or standards to speed up maturation. This influence is a core consideration for business strategy. 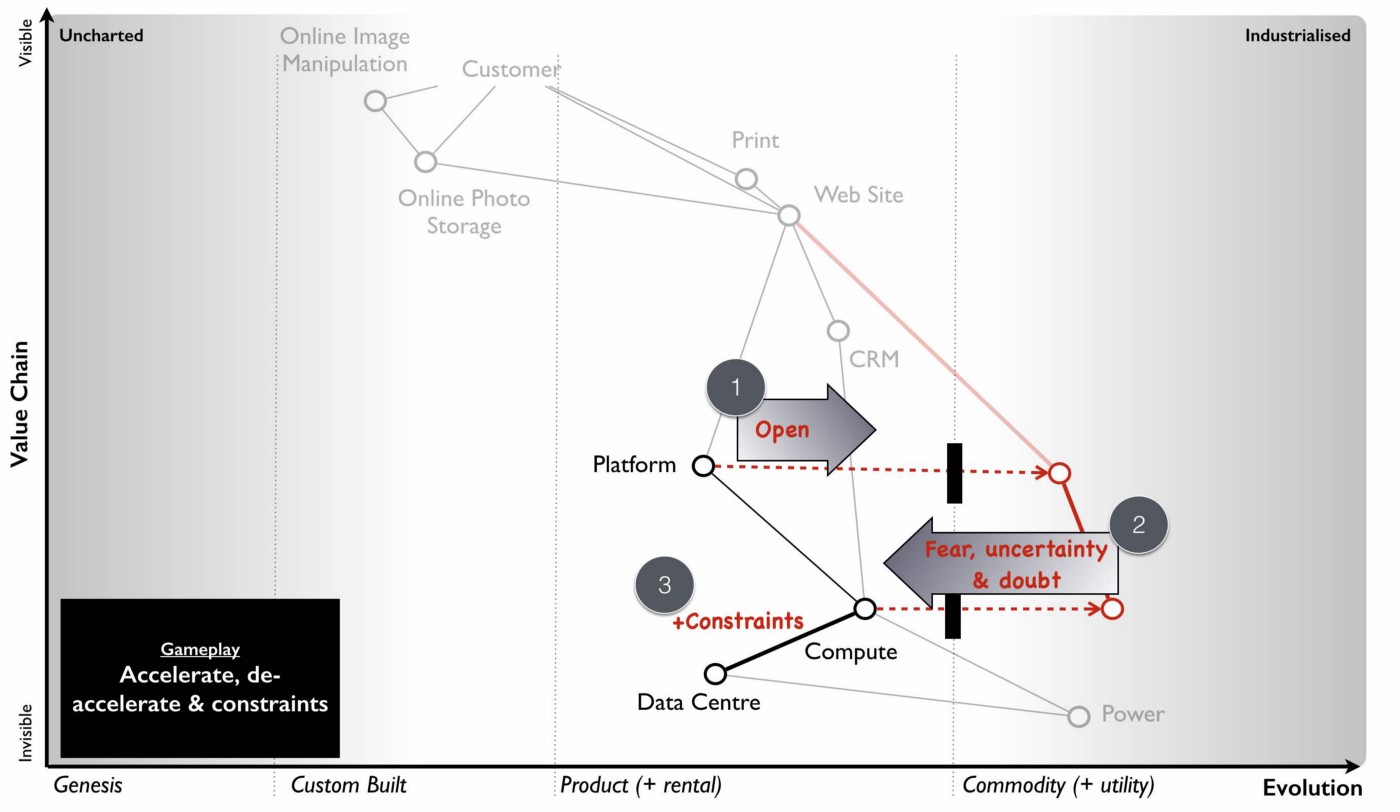 New components can pop up on the left. This is the essential other consideration: Where do you want innovation to happen and on what other components is it built? Novelty comes with high uncertainty though.

Maps are for Organization

One claim of Wardley is that you should structure a company according to the three evolutionary phases because it aligns with three personalities: Pioneers who come up with new ideas every week. Settlers who turn prototypes into products. City planners who milk the value from mature technology.

Wardley explains that the settlers are important between pioneers and city planners although many companies try to make it with two parts (R&D vs manufacturing): Pioneers will not build successful products as they lose interest and City planners reject prototypes as too flaky.

I’ve found that an executive structure which mimics the organisation to be of use i.e. a CEO, a Chief Pioneer, a Chief Settler and a Chief Town Planner can be applied. [...] Contrary to popular concepts of culture, the structure causes three separate cultures to flourish. This is somewhat counter to general thinking because the culture results from the structure and not the other way around. It also means you don’t have a single company culture but multiple that you need to maintain. –Doctrine

What a company needs is continuous evolution. Jan Bosch is calling for a similar approach:

Building new platforms to replace existing ones is a highly risky R&D initiative fraught with challenges. Instead, commit to continuously investing a part of your R&D resources in refactoring your existing platform. The best platform is one that never has to be replaced because it’s always current and up to date. –Don’t build new platforms by Jan Bosch

The three phases also map to more tactical organization. Wardley recommends to use agile methods one the left, more traditional methods in the middle, and out sourcing on the right. I can confirm that it often goes wrong. For example, innovative custom stuff is outsourced because in-house development is already at full capacity with the product. Unfortunately, the coordination overhead is so big that development speed is slow instead of the quick iterations you actually need.

It becomes even worse in a customer-supplier relationship. Most projects contain mature and novel parts. If the parts provided from a supplier contains novel stuff it is impossible to specify them in advance. Inevitably, there will be change requests and the costs explode.

The fault is with the supplier who should have the experience to know that one size fits all cannot work. Unfortunately, and there is no polite way of saying this, it’s a lucrative scam. Even better, if the scam works — especially if the supplier waives some cost as a gesture of goodwill — then the next time the buyer will try even harder to specify the next system in more detail –Doctrine 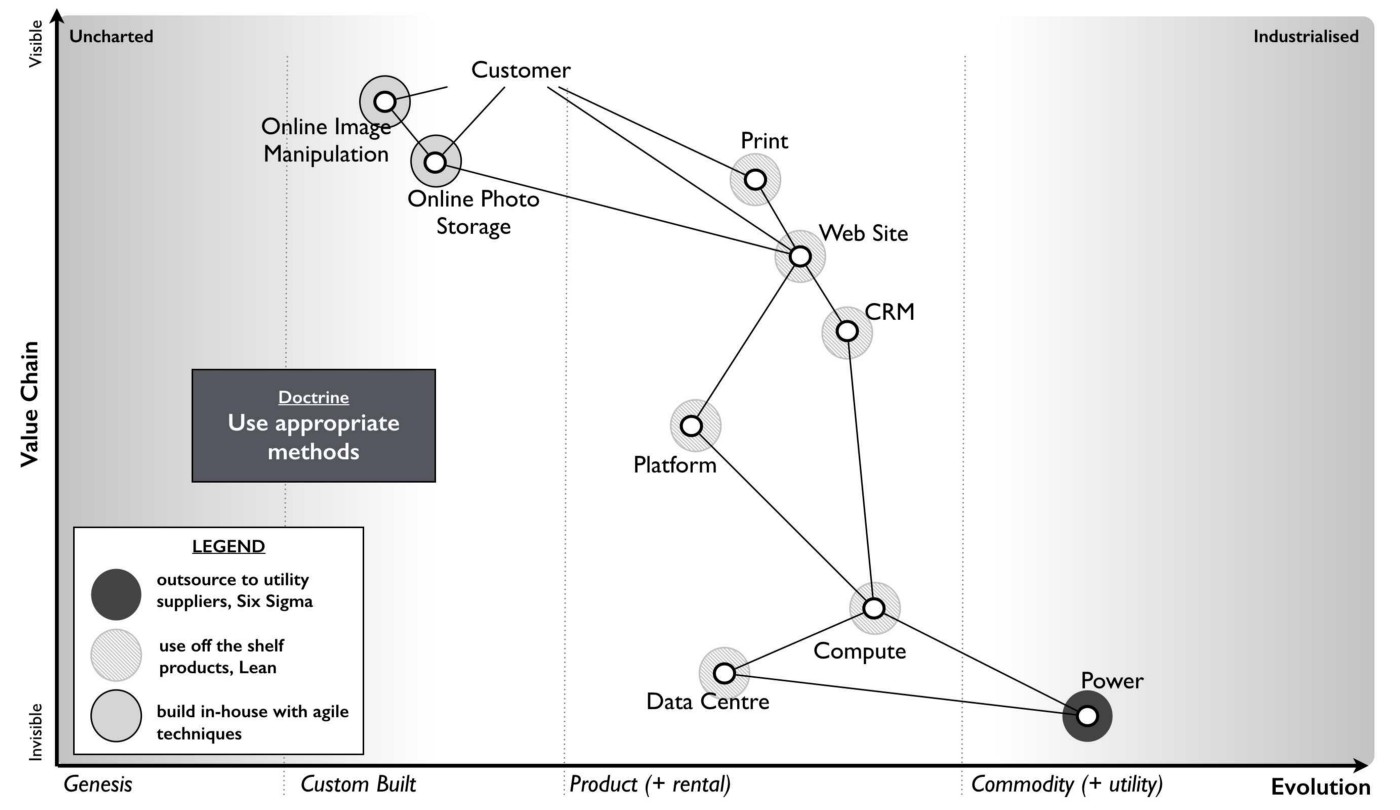 One question the book did not answer for me is how you map cooperation and competition. In other blog posts, Wardley seems to just map stuff over each other with different colors.

The maps seem to lend themselves to anticipate only one movement: Evolution to maturity. I don't see how regulatory changes or a recession could be visualized. They affect the strategy. Wardley mentions Valéry paradox as a potential argument against this: If it becomes too complicated, people don't use it. His target audience is managers looking at 2x2 diagrams.

Wardley has a hard time to actually define this "evolution". Eventually, it comes to this definition:

One critique Wardley addresses is:

Nearly every time I did this, I was dismissed by the simple question “what evidence do you have that evolution works in this way?” –Finding a new purpose

However, his long-winded explanation confuses instead of convinces me. I would define evolution via margins:

What would be the problem with that approach?

Does it work? It sticks.

When Wardley started using his technique, he came up with a strategy to wrestle cloud dominance from Amazon. Unfortunately, the board kick him out before he could actually execute it, so we don't know if it would have worked. Later he worked with Ubuntu again on cloud topics:

My proudest moment came from hearing a CIO talk about how “the future was all RedHat and then suddenly it was all Ubuntu”. I played a small part in that. –To infinity and beyond

On the other hand, what does "works" mean here? A great map does make a great general and if you never had maps, how would you evaluate the advantage? While I lack any military experience, I would assume that if a general ever used maps then he does not want to work without them anymore. I find myself visualizing business life with Wardleys tool, so it seems to stick.

At the end of life of a technology, you want to extract the maximum of value from a company. At least as an investor. For the employees it feels unfair to work hard for a sinking ship. You want to work at the important stuff. Wardley explains this hard truth well.

Of course, if you do embark on the death spiral then whilst it’s appalling for those employed by the company, the executives are often rewarded. Why? Well, it comes back to the financial markets. If a market knows this transition is occurring then one tactic is to invest in the future industry (e.g. Amazon) whilst extracting as much short term value as possible from the past (e.g. existing hardware players). This requires a high expectation of share buy-backs, dividends and mergers in those past giants. It’s not that you’re expecting a long term gain from such investments but instead highly profitable short term wins which are balanced with your long term investment in the future. From a financial point of view then the death spiral is exactly what you want to see as you don’t care about the long term survivability of the company (your investment will be gone by then) but you do want maximum extraction of value. –I wasn’t expecting that!

It often seems that selling a commodity is undesirable as you focus on squeezing out the last value before it dies. However, you may get a strategic advantage if more innovative players build on your platform. Just imagine the insights Amazon has into Silicon Valley startups. They are essentially able to monitor their load in real-time. Meanwhile Facebook knows more about each and every customer than the startups themselves.

Being constantly the first mover to industrialise a component provides a huge benefit in enabling us to effectively be a fast follower to future success and wealth generation. The larger the ecosystem we build, the more powerful the benefits become. There is a network effect here and this model stood in stark contrast to what I had been told — that you should be a fast follower and that you could be one of highly innovate, efficient or customer focused. –The play and the decision to act 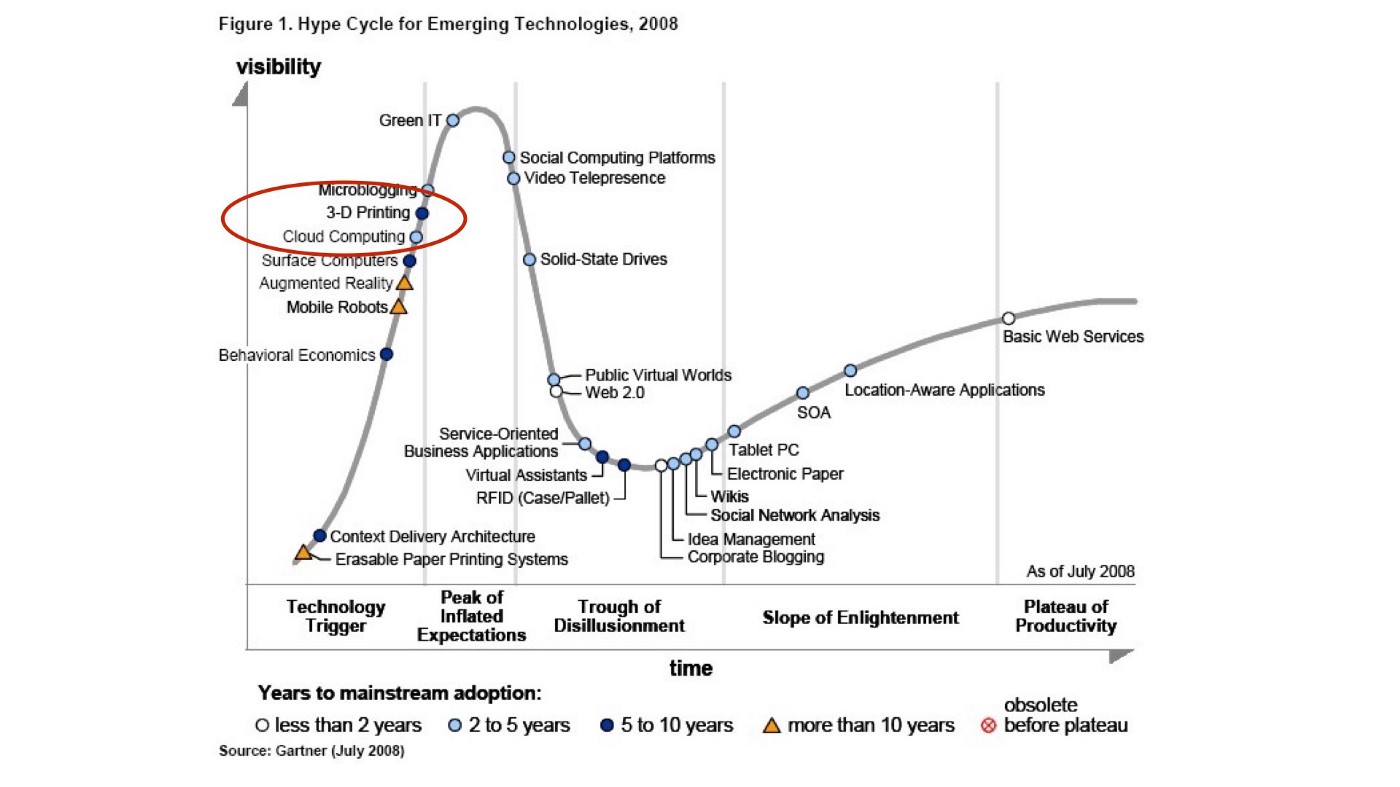 Two points — cloud computing and 3D printing — on almost exactly the same position of the hype cycle required radically different approaches to investment and strategy. One was “all in”, the other was “wait and see”. [...] I was going “all in” when competitors thought they had time. [...] Thank you Gartner, you probably have no idea how much you’ve helped me. Better luck next time IBM, HP, Dell, RedHat … assuming they survive what is to come. –To infinity and beyond

If you are interested in business strategy, I recommend to read at least the first five chapters. It gives you the mental tool.

Afterwards, it repeats (partially intentionally) with more detail. Since I'm not a CEO myself I did not get that much out of it. The second half of the book suffers from a lot of repetition. If it ever gets published as a real book, an editor should clean that up.

A book which presents a map visualization for business strategy