In 1980 Seymour Papert published his book "Mindstorms". People associate it with Logo (or maybe Lego Mindstorms). However, Papert explicitly writes that LOGO is only a tool and his intention is rather a revolution of education enabled by computers.

At the end of the book Papert tries to envision a world without schools as we know them today. As a substitute he describes Samba schools. Do not think about the colorful parade in Rio, but instead what these schools are during the rest of the year: A community of people of all ages where they meet, live, work, and also learn.

The primary theory behind Paperts view comes from Piaget. They worked together for years. Papert does not focus on what we see a Piagets main contribution but on the idea that knowledge is built by ideas which build on each other. For example, gears fascinated Papert as a small kid. Through his play he learned a mental model how gears of different sizes interact. He used this model years later to understand algebra. For Papert, math is not learned as abstract concepts but in close relation to physical things.

Like Papert use gears to learn algebra, they designed the Logo turtle to learn geometry. Visit the Turtle Academy to try it in your browser. They also had a turtle robot, which provided a more physical interaction. 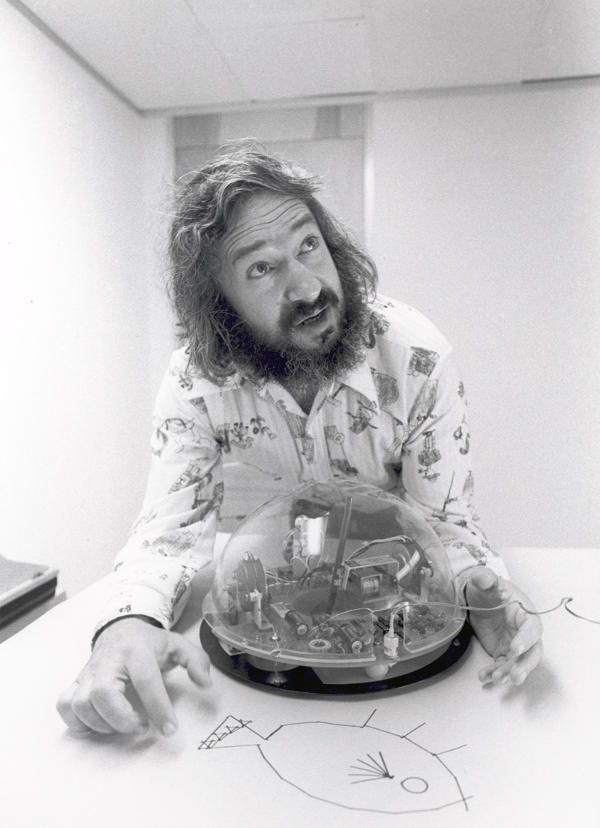 The turtle gives kids an entity to relate to. They can pretend to be the turtle to figure out how to achieve something. Suppose you want to draw a circle. If you think in commands, it is hard because you get distracted by numbers. Pretend to be the turtle. How do you walk in a circle? That is easy: Make a step, turn a little, repeat. Now you can certainly make the turtle do something similar.

Also, it is not "programming" what the kids do. It is only "talking to the turtle". That reduces psychological barriers. I have witnessed this resistance myself. People are intimidated by "algorithms" even though every cooking recipe is an "algorithm" as well. People consider "programming" with typing arcane code into computers, yet programmers reveer quotes like

Programs must be written for people to read, and only incidentally for machines to execute. – Harold Abelson, SICP

Concepts Papert stresses are "debugging" and "modularisation". He even describes it in physical terms with juggling. In earlier times it required hours to learn juggling by just trying until it worked. A modern approach "modularised" the juggling into three steps, which are roughly: one ball, two balls, three balls. If you fail at one step, you retreat to an earlier step and debug your mistake there. For example, many learners intuitively focus on a single ball. This becomes hard with two balls and impossible with three. Once you identify this issue, you can "debug" it. Go back to one ball and learn to throw it from one hand to the other while looking straight ahead.

What seems to be missing in todays Logo implementations are different kind of turtles. For example, Papert also describes a Newton-turtle where you do not specify how much it moves forward, but instead you change its velocity. This provides a relation to physics.

Todays kids are used to screens and drawing a circle is probably not as enticing as it was in the seventies. Papert was one of the founding fathers of the MIT Media Lab. These days, they provide Scratch. It comes with an online community to share your creations. An introductory task is to animate your name: Select the letters, place them on the screen, then make them do things. Here is mine. Click on the letters.

Now make your own. Maybe add sound? Move multiple letters at once? Move it in a circle? Just play.

Despite Paperts expectation of an education revolution, schools have not changed fundamentally since he published the book. They teach the rules, like for example grammar, primarily by repetition and force. Pupils get tasks and then feedback how well they did. Rinse, repeat. How many pupils understood the meaning and importance of grammar such that they want to learn it? Papert claims that there might be a better way: We enable kids to play with grammar and that a computer can help.

What does "playing with grammar" mean? Kids must be able to change the rules and see what the effects are. For example, we could change the rule "subject-predicate-object" into "object-predicate-subject". How do we see the effects now? We have to write sentences in our new language. This is the part where a computer can be handy because it can do such repetitive tasks very quickly. As a (very advanced) example of such play, see Martin O'Learys Generating naming languages. Since I have seen kids motivated to create fantasy worlds, this feels like a motivating thing to me. It also does not fit into our school system with grades though.

This also made me think about the difference between toys and games: If you add a goal to a toy, it becomes a game (or at least a "competition"). Thanks to smartphones and app stores we have plenty of games available. However, kids desperately need toys because only toys make you explore concepts on your own. The educational games I have seen only wrap pretty animations around the boring reptitive work.

Now that we have computers, Papert says we can let kids develop concepts on their own instead of force-feeding them the correct ones. The ability to develop and validate concepts on your own is important. Schools seem incapable of providing an environment for that, at least not on purpose.

"But we must not forget that while good teachers play the role of mutual friends who can provide introductions, the actual job of getting to know an idea or a person cannot be done by a third party."

For me as a parent this means I have to figure out alternatives. So far we have Logo for geometry. Coming up with such "microworlds" is not trivial because it requires a good understanding of the corresponding topic, e.g. geometry.

So the core insight I got from the book: Kids benefit from computers by having simulations (microworlds) where they can play (no predefined goals!) around with concepts. The challenge is to find or design the right simulation such that they have close relationships to concepts we want to teach.

So, Explorable Explanations by Nicky Case is very close although they do not encourage to play around like Paperts turtle does.

Image of Papert and Turtle from Wikimedia Commons.

A book about a revolution of education which sadly never happened.